Ringing in the summer with a little chemo

Hi, Team Naaman! Before updates, we want to say thank you again to Serenity Salon and Day Spa for the Cut-a-thon on May 5th. It was a great success, and we were even featured on the news.  If you missed it, find the link here: Cheeky on the news.  Furthermore, May 17th was a killer party at North Italian Club! Shout outs to Ragozzino Foods, Sandoval Band, and our loving friends and family for the hard work that went into it.  We are speechless. Thank you.  If anyone has photos, feel free to share on the Team Naaman Facebook page or Twitter.

I want to apologize for being behind on posts, and apologize in advance for being brain dead. We are sleeping on a newborn schedule over here (read: not sleeping) and most of the time, I am not making sense when I talk. And we sure have  a lot of updates.  Here goes!

Naaman is Day 22 of Interim Maintenance 2 now (the phase of chemo) and should have had chemo yesterday.  This phase is a ten days on/ten days off sort of trend, and should be finished by the beginning of July if there are no delays – which there already have been. Delays are common, as he needs to make counts for each step of the way; not only do we need platelets of 75 and ANC of 750, other factors need to be in place, such as bilirubin (liver).  Yesterday, Naaman’s bilirubin went up a little, and to be quite honest, we got really worried.  Chemo meds affect the liver, so it could have just been a side effect, but it could also be the return of liver disease. We came home from clinic yesterday, prayed a ton, and went back today to check levels again. If levels went up, we would need an ultrasound of his liver, and then TBD next.  But bilirubin was down! ANC went down, too, but it was fine yesterday, so we were able to sneak our way into chemo anyway. He finished his chemo like a champ, came home and took a glorious nap, and even drank some water and ate some ketchup (who knows).

The bad news is this chemo needs to be two days back-to-back, so guess where the Johnsons are going tomorrow (Saturday)? Admission to oncology for chemo. Praying to get his meds, clear, and get on with the weekend.  Next week, Naaman will go in Tuesday and Thursday for checks, and plan for chemo the following Monday.

An important change is that he is back on the clinical trial drug. Fortunately, he has the NG tube so we don’t have to worry about how gross it tastes and how to get him to take it. In fact, I just gave him his evening dose while he slept, none the wiser.  There are some benefits to the NG tube!

Yes, Naaman still has the NG tube, and we are all quite used to it. On the bright side, as I mentioned, the NG tube is great to give him meds without trouble.  I also have to push water through a large syringe (60mL) to ensure he is staying hydrated and he gets tube feeds.  He can eat and drink; he doesn’t want to for a few reasons:

While the NG tube is a nuisance, it is reassuring that we can control the meds and nutrition aspect.  Naaman also finds himself getting lots of free stuff at the store (he is a ham but the NG also draws serious attention).  But the NG tube sure is a nuisance. The dressing (tape) peels and gets dirty. It can’t get wet, so baths and playing in the water table outside are tricky.  So far, he has never tried to pull the NG tube out, but there have been some close calls with trying to get his shirt off nicely or when he and Nadine are rough-housing.  He has a cold, too, and he will sneeze and tell me “Face hurt” and hold the tube-side of his nose.

An important change is that he has several daytime feeds (called bolus feeds) instead of continuous feed overnight while he sleeps.  In case you are wondering how we get a toddler to stay still to be hooked up to an IV pole with a feeding bag for two hours, and if we never leave the house then… his pump comes with a chic (sarcasm) travel backpack meant for very tall adults.  I can set up the bag and pump in there and bring that around the house, yard, car, stores, etc.  I even have to pack it for clinic.  Stay tuned: we found an Etsy seller who converts kid backpacks into feeding pump backpacks, which I am hoping will be a game changer. If he could wear the pump in his own backpack, he would have a lot more freedom.

Here is the backpack, unzipped to get a sense of what it looks like: 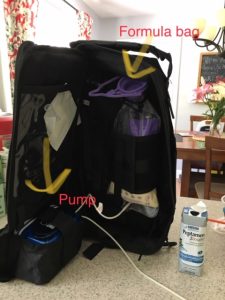 While Birth to Three (early intervention) is coming to evaluate Naaman, they can’t come until June, and his doctor wants him seen for physical therapy sooner.  His chemo meds have made his ankles quite inflexible, and he has some foot/leg pain.  Hopefully, they will have some suggestions on how to help the little guy out.