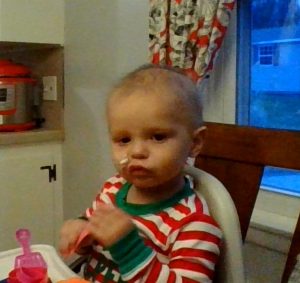 Cheeky made it home today, with a fresh NG tube dressing and enough platelets to last until tomorrow.  His counts are down, but not too down, with the exception of his platelets. Even with transfusions almost daily, his platelets were dropped to undesired levels. It’s amazing what a lousy rhinovirus can do to bone marrow when you’re comprised!

We go back to clinic tomorrow morning to check his levels, and hopefully just get some platelets and go home. We had the option to stay in the hospital again tonight if we wanted – which is great that they allow that since many families are coming from over an hour’s drive away – but we wanted to all sleep under one roof again.  Cheeky took a solid nap in his own crib and was delighted to see Nadine when she got home from school. He still doesn’t want to eat or drink much of anything, but we will also revisit that in clinic tomorrow. While he did start using the NG tube for electrolytes in the hospital and tolerated it well, they let us go home without any tube feeding, hoping he will perk up and eat at home. Mostly he just chewed up waffles and spit them out, so we will keep trying. Thank you for prayer, for letters, for calls. We are always grateful, even if it takes us eternity to get back to you. Cheeky even got some fan mail from Pancho Billa this week! For those who aren’t familiar with this cancer-fighting Buffalo Bills superfan, check out his story: Here.