Today was Naaman’s first chemotherapy treatment after being discharged. All his treatments from this point on will be at the YNHCH outpatient center for pediatric oncology. As parents we are thrust into the world of medication calendars and treatment schedules to make sure he is receiving the correct treatment to cure his cancer. Not an easy task.

How did the morning start? It started with a hungry young boy not being allowed to eat or drink for several hours. We decided to bring Naaman’s red push car with us to the hospital as he loves it. It would be a good distraction (and a means for us to transport him into the hospital). Turns out people love to see an adorable little guy driving a tiny red car around the hospital. It seems to brighten people’s day.

We arrived promptly at 8am and thus began our extremely long day. The day started with us getting Naaman’s port IV tube put back into place by one of the nurses and to take off his old dressing along his neck. It requires numbing the area on and around the skin where the port is (which we do) and the nurse putting a needle into his skin where the connection is. He was pretty angry at this point already and the day was just beginning. I really don’t blame him.

They weighed and measured him and it turns out he lost a little weight. No big deal right? Actually very big deal. Turns out any weight differences and they have to adjust chemo regimens to correspond and this requires sending out an order for new drugs. The joke with the staff we learned over several days is over “hospital time” which essentially means nothing happens on time.

After quite a while in which we struggled to pacify his hunger Naaman was given a medication to put him to sleep so he could have his spinal tap done. This allows them to examine his spinal fluid. We both decided to step out for the procedure for our few minutes of quiet.

Around a half hour later the “beast” awoke and was brought to us. At this point he was supposed to be given his chemo medications which take about 15 minutes to be dispersed through an IV. Well remember that order that had to be put in for his weight? Yeah “hospital time”. We waited for hours for the medication to arrive while we tried to pacify Naaman. Thankfully he was able to eat however he turned into a little monster demanding things with a point of his finger. They did warn us that some medications (especially those darn steroids) do have side effects such as anger, moodiness and hunger. We can’t wait to get our sweet Naaman back.  Luckily I had my laptop and Nicole was able to load up Moana which both half pacified him and put him to sleep.

Finally the medications ordered arrived and he was able to finish the procedure and go home. A very long day indeed. We definitely learned some valuable lessons though on that first day of what to do, not to do and what to bring. Every day is a learning experience.

Cheeky did have a good appetite when home but was very sleepy and lethargic. He’s now happily sleeping (he points to his crib to go to bed). Let’s hope he sleeps the night and wakes up with some more energy. 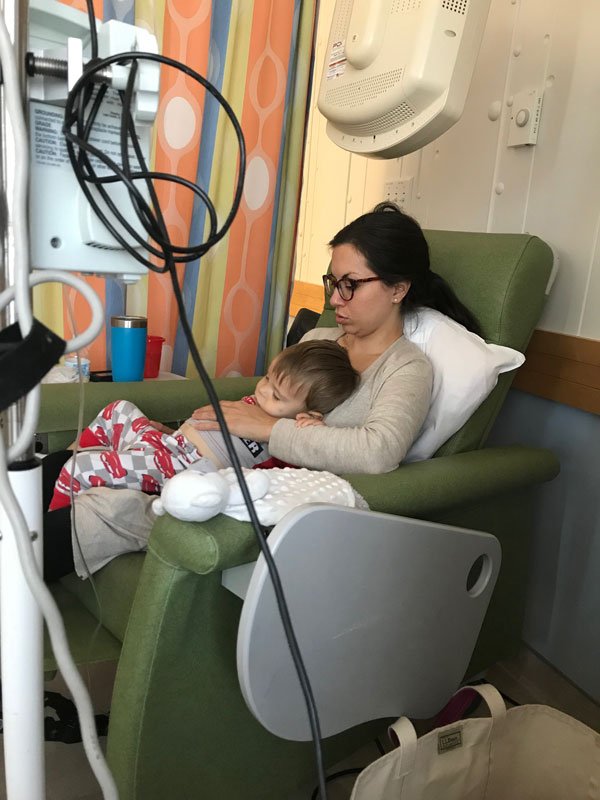